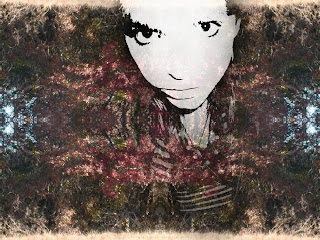 Here's another one of my silly first person POV bizarre thoughts journal entry-type things. Enjoy, cringe, whatever your pleasure.

The darkness thrummed softly in my ear, radiating a pressure in my sinus cavity that grew exponentially until I realized it was just the blood pounding in my brain, furiously pumped there by my heart because I let my thoughts stray to him.

Stupid thoughts. Sometimes I wish I was more like a Zen master who can control their thoughts and emotions, or simply take down the person that haunts my mind with a swift roundhouse kick to the head.

Or maybe that’s Chuck Norris. I get confused sometimes.

A horn blew in the distance, the deep cry of the freight train which tells people to get the hell out of the way because they are too big to stop for just anyone. Hancock, obviously, or Superman, but that’s about it. It’s said the sound of a train’s horn is the saddest sound in the world, but what’s sad about telling people to get out of the way?

Not to mention the train has only been in common usage since the 1800s, so what was the most mournful sound before that? I want to know who came up with the Mournful Scale, anyway. The sound of my bank’s ATM beeping at me while it displays ‘Your account is insufficient to support this transaction’ is pretty damn mournful to me.

So is the sound my phone makes when he doesn’t call.

Headlights danced across my ceiling as a car sped by, and I wondered where it was that they needed to get to in such a hurry. Maybe someone was waiting for them. Maybe they were late for work.

Maybe their crack-head ho was giving birth prematurely to a drug addicted baby in the backseat and they were trying to get to the river fast enough to dump them in it before there was blood all over the plum leather interior.

I pulled my pillow closer and buried my face in it, pretending it smelled like him. His head had never rested there, and I’ve no idea what he smells like, but I’ve got a pretty good imagination. I’ve decided that he smells like trees and the ocean and those little cinnamon bits that cover the top of a canned Pillsbury roll.

Sometimes he smells like fingernail polish remover, but that could actually be my hand beneath the pillow. I don’t think he paints his nails.

Happy Friday, y'all.
Posted by Christi Goddard at 7:13 PM

There are so many things I liked about this. The ironic humor, again, was outstanding. It made the heartbreak that much more painful. I loved it all. I could identify with so many elements. 'the sound my phone makes when he doesn't call.' So good. You are awesome, Christi.

Wow, I have been so remiss in not following you before. I LOVED this. LOVE LOVE LOVE it.

"So is the sound my phone makes when he doesn't call." O.M.G. Perfect. Just perfect.

Anne: I'm really glad you liked it. And no worries about not following me. I follow twice as many people than follow me. My follows are the elite ones, those that truly appreciate good writing. *laughs at self* Okay, no, I had to pay most of them.

This is incredible, Christi. I was hanging on to your every word. I loved the entire paragraph about the mournful sounds, the train and ATM. Very well written! Bravo!

Shelley: I'm so glad these are being enjoyed. I fret each time I post that my followers are going to say, 'Oh, yeah. She's lost her mind.'

heehehehe. I seriously loved the part about the crackhead ho and him smelling like fingernail polish...

Thanks for the tip, Tiffany! I sent mine in. I'm almost afraid to know what an agent is actually thinking when they read my query ;-)

i love your sense of humor...
"I want to know who came up with the Mournful Scale, anyway. The sound of my bank’s ATM beeping at me while it displays ‘Your account is insufficient to support this transaction’ is pretty damn mournful to me."
awesome.

Love. That is the best I can come up with. LOVE!

Thanks so much, aspiring. It makes me glad to know other people find humor in the same twisted way I do :-)


This article is interesting and useful. And let me share an article about health which insha Allah will be very useful if we use it again for others.

His article is very helpful at all thanks

This article is interesting and useful. And let me share an article about health which insha Allah will be very useful if we use it again for others.