A Stroll Down Memory Lane

I was reading through some old blog posts from when I first started out on this little journey of mine two years ago and also reading the comments posted by those of you who have been with me the longest. It might seem crazy to say this, but I miss that part of my journey. I miss posting about query letters sent or what I read at some agent's blog or having meltdowns that you guys talk me down from. Weird, huh?

I also found this little story I shared, and I giggled all over again. I thought I'd post it again for those who never saw it or those who might enjoy reading it again.

Have you ever felt like you were not explaining yourself well enough, so took that extra, over-the-top bit of oomph to really get your point across --only to then wish you had kept your big mouth shut? I learned at a very young age to stop myself from doing this. Let me explain:

My father had a best friend since childhood who had two daughters appx the same age as my sister and me. They traveled from Kansas to Colorado (where I lived at the time) one summer to visit when I was nine. My sister was ten, the other two girls were nine and eleven.

My sister and the eldest of the two usually picked on me and the other nine year old. They would taunt us and say things that weren't very nice --or just beat us up. One night, while in my room, the four of us got into a VERY heated discussion that attracted the attention of the adults who then called us into the living room.

The four of us dutifully answered the call, and I was the one volunteered to explain what all the commotion was about.

"Chelle and Julie are saying that Kris and I are girlfriends."

"They said that we sleep together."

**Again the parents say nothing, but look sort of amused**

At that point, I was sure that all four adults were complete idiots. How could they not understand how totally violated I was to have my sexuality questioned at the tender age of nine?

So, in effort to make them fully understand the depth of my horror, I puffed out my chest and said, "They said that we... you know... F**K."

I did not see the other three girls behind me back away, but my dad often likens it to the parting of the Red Sea. My step-mother looked furious. My father and his best friend burst out laughing. His best friend's wife told us all to go back to our bedrooms and leave each other alone.

So, in short, I did not get my ass whooped, but I can tell you that is the memory that always pops into my head whenever I think someone is not getting my point. Now, instead of continuing on, I just assume they are an idiot and keep my mouth shut so I don't sound like one.

Also, no offense intended to those of alternative lifestyle in the telling of this story. I was nine and had no idea what homosexuality really was. Now I have many friends of the persuasion who make sure I understand fully. :-)
Posted by Christi Goddard at 9:19 PM 13 comments:

I try not to have them. I know that each mistake I've made has led me to where I am, so I don't spend a lot of time thinking about the whatifs and ifonlys (ifonlies?) of what might have been. Going to a different school or taking a different job or moving to a different town at any point would have changed the journey that I've been on to find myself. Maybe some roads could have been easier, but would I still be the person I am today if I hadn't totally messed up a bajillion times?

But there are things I regret that remind me that I'm still growing as a person. My biggest regret is the way I lose contact with people. We all do it, right? That friend in high school who goes to another college. Time passes, phone numbers get lost, addresses get misplaces, people move... and after a while you decide, 'hey, if we've not talked in a few months, what's a couple more?' Eventually, it's been so long, you start to think, 'hey, maybe we're not actually friends anymore.' It's not because you liked them any less or grew angry. It's because you just didn't take the time, and part of you resented the fact that they didn't take the time, either.

I regret that I did this with one of my friends. I've been thinking a lot about them lately, and now that we've not spoken in six years, I can't find the courage to give them a call. Kind of sad, isn't it? Do you have a friend like that? A person who pops into your head when you glance at the phone and make excuses to yourself, calling them 'reasons' not to call?
Posted by Christi Goddard at 9:55 PM 15 comments:

We all have them, right? I have the kind of personality that compels me to completely immerse myself into something I find that catches my imagination. I can become so focused on something that I hardly turn my mind to anything else. It can be that way with writing or reading, and it usually is, but lately I've rediscovered my love of cartoons.

Okay, okay, to be honest, I've always loved cartoons. I'm really just a big kid. But my daughter loves anime, a thing which I have always avoided and disliked since the early Pokemon years (gods, that show drove me nuts). BUT, I will now admit, I have found a FEW anime series that I really enjoy, so I have spent far too much free-time catching up with series on Netflix.

Much like what I choose to read or write, I am very specific in what I want in this form of entertainment, and I am only interested in Victorian Era style anime that has no ninjas or tiny-outfitted girls who have been 'blessed' shall we say in the chest department. There is murder and conspiracies and complicated plots, all of which are right up my alley. The few anime I enjoy are based on the manga series of their namesakes, so I have had to learn how to read manga. It... takes some getting used to, reading backwards.

How about you guys? What are your guilty pleasures?
Posted by Christi Goddard at 6:56 PM 35 comments:

I'm being published. Yes, yes, it took me ages to work up the nerve to announce it. I was offered back in September and since then it's been a hectic life of editing two books (two were signed) and getting all my ducks in a row, and I pretty much abandoned EVERYBODY because I am the suck. The holiday season didn't help, either.

So anyway, book coming out. Huzzah! It's the third book I wrote, initially called "Meantime Elsewhere" but it is now called "Four in the Morning." 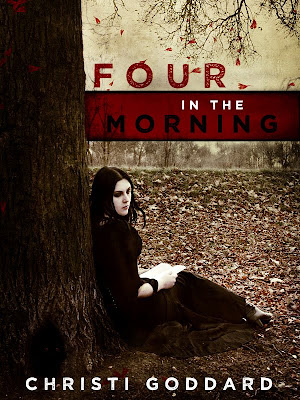 This is the e-book cover. 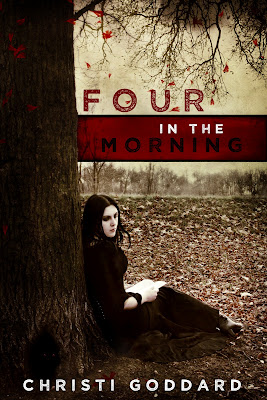 Below that is the printed cover.

So... I guess that's everything on me. What about you guys? Up to anything new this year? Tell me all about it. I'm going to be making my blog rounds again since I know I've been a serious slacker in that regard.
Posted by Christi Goddard at 10:52 AM 41 comments: