Rolling In The Deep

...is my newest temporary favorite song, sung by Adele. It sort of fits with the story below the picture. I swear I'm not totally random. At the moment.

Janet Reid had a writing contest several days ago and the winners were announced this morning. Alas, I am again NOT a winner of one of these contests she has periodically, but I find the exercise of writing a story in a hundred words or less using a few specific words tossed in a bit of fun (this time was abnegation, candor, dauntless, amity, and erudite). It's sort of like a puzzle. She's doing it again, so jaunt over to her blog tomorrow afternoon to enter for an ARC of "Divergent."

I don't actually need to link any of you to Janet Reid, do I?

Anyhoo, I rather liked my entry this time and wanted to share it with you guys. Hope you like it. 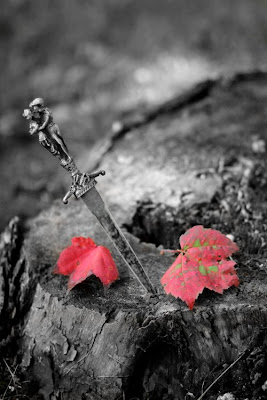 I tossed amity between our clans aside to burrow into his arms. I mistook abnegation for strength. Once dauntless and cunning, my cleared vision knew him a traitor and a fiend. Warmonger by proxy.

I’m no one’s scapegoat. My mistakes; my debt. I’ll pay none but mine.

Autumn leaves above mocked me. I’d been gone too long. I awaited my fate before a ring of erudite men who decided all. Candor was my only ally now.

“My penance?” I assumed my return.

Lies We Tell Ourselves

Ever notice the person you lie to the most in your life is yourself? Why do we do this? I mean, it's not like we don't know the truth. Example: I told myself earlier it didn't matter I was out of butter. My baked potato would still be just fine with enough cheese, mushrooms, and sour cream. Eghads. I pretty much just ate the toppings, and the ravaged husk of the pomme de terre is still sitting on my plate. (wow, 20 year flashback to French class)

There's other lies of course. They build up inside you, fester like boils you hope never pop and ooze all over the reality you've created for yourself. (I love the imagery, right?) Some of the great ones we tell ourselves this time of year, only we disguise them as 'New Year Resolutions.' Pft. I totally didn't bother this year. Know why? I've discovered I don't know what I want. Okay, well... money. That's a given, though. Everyone wants money. Again, why? Because this is a capitalist society and we cannot survive without currency, no matter how removed from society we fancy ourselves.

Did you get that? I WRITE BECAUSE I HAVE TO.

Otherwise, there'd be a short (unimaginatively written) post somewhere about a woman who snapped and did something drastic. Like buy tofu in bulk. Okay, I'd never go that far, but whatever I did, it would be highly unpleasant and people would TALK. Mostly to the eyewitnesses of the spectacle that would be my breakdown. I predict nudity (not for the squeamish. I look like Jabba the Hutt and Michael Jackson's love child) and loud renditions of classic rock through a megaphone covered in glitter and scarves. Maybe even something worse.

My point is, writing is not a choice. It's not for me, and it probably isn't for you. Finding the time, deciding what to write, when, where, how, etc. - yes, those are all choices. But the writing itself: that is necessary for survival. In fact, if I was ever on Survivor, I'd be on the beach with a stick, writing in the sand.

It would double as a weapon, if need be.

So, told yourself any good lies lately?
Posted by Christi Goddard at 8:39 PM 12 comments:

Labels: i imagine my breakdown would look like..., liars, writing

A Rainy Day in Texas

It's been raining for at least five hours. The nutter I am, my mood is actually improved by a cloudy, drizzly day. It's a soothing sound; steady drops on the roof, the crinkle of the dried leaves in the yard as their pelted, the dull sky and empty streets give a sense of solitary, as if there's been an Apocolypse I slept through. Time, which usually dashes by as it gives me the finger, slows to pass me at a meander and give a dismissive shrug instead.

I'm at a crossroads the last several days. I'm the suck at decisions, and I've needed to make one. I put it off in the usual ways: avoidance, denial, occupying myself with other things, etc. But the fact remains; a decision looms.

Which MS do I work on?

I stopped working on MS3 several weeks ago. Real life threw me a lot and writing wasn't in the cards during the holidays. Now that the new year has arrived, I know I should be working on something, and logic states I should return to the WIP. But something happened about a week ago, and every time I sit down at the computer to add to chapter 9 of MS3, my mind wanders back to what happened a week ago: I wrote a new beginning to MS1 which popped into my head. The beginning led to a realization of how I could make the book 300% better.

My muse begs me to go back to MS1, a.k.a. kick a dead horse. It had no agent interest nor feedback as to why it had no agent interest. It could have been the length, but it could have been anything. MS2 had several agents ask for partials and fulls, and people who've read what I've done so far on MS3 like it as much if not more than MS2, so logic dictates it might have more agent interest when I query than MS2 did. But my muse longs for Dead Horse MS1. The artist in me wants to follow my muse, but the part of me that wants to be published someday says I should only look forwards and not backwards.

I'm sure even the greats wish they could revisit something they wrote and make it better. Logic tells me it's a bad idea. Anyone else have this problem at times? How do you get past it?
Posted by Christi Goddard at 10:09 AM 12 comments:

Guess Who's Not Dead

Well, there's you, of course. Look at you, all lively and filled with hope for the new year!

There's me, obviously. I know I vanished for over a month, and I'll make no excuses. I'd think of blogging and couldn't think of a single thing to say that wasn't already being said by everyone else. I hope you all had a great holiday season, and I hope your Monday didn't suck too awful bad.

In a few weeks is my one year blog anniversary. I think about the year I've had, and it's definitely been a rollercoaster of hope and dismay. I think I've achieved my happy place, though. I'm not defeated. I'd like to think of it as pacing myself. For so many months I worked tirelessly (or dragging ass at times) on finding an agent. I wrote two MSS. Started two more. I kept pushing myself, and you know what? I don't operate that well under pressure, especially pressure I put on myself. I had about ten agents ask for partials or fulls on my second MS, and I let myself get wrapped up in the hope of being published.

I've reached a point of patience I didn't know I had. I'll keep toiling, at my own pace on the stories I want to write. Sometimes I think I should write to the market. I've been told my stories are too far removed from mainstream that I'm shooting myself in the foot. I decided I'm okay with that. I'd rather 'make it' on a book that is 'me' than a book I wrote I didn't enjoy, and have to write more just like it or similar to it. I just need to find an agent that fits; one that gets my quirky humor and thinks my crazy stories will appeal to enough readers to make it worth their while.

Right? Maybe? I suspect this might be another lie to myself.

How 'bout you guys? Keeping it real or swimming in fantasy? Anyone land an agent while I sat on the couch this month, nursing my allergy to the internet?
Posted by Christi Goddard at 7:54 PM 23 comments: