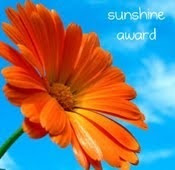 Got this one from John Paul over at: http://skymeetsground.blogspot.com/
This one requires me to pass it on to some people who make me laugh regularly. Unfortunately, I cannot pass it on to Simon Pegg since he won't see it, so I chose these people:

From dear Anne at http://piedmontwriter.blogspot.com/ I received this award: 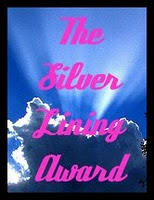 The rules didn't seem very specific, so I'm just going to hand it out, okay?

Now for some poetry. You KNOW you've been DYING to hear some of my poetry.

You are the window through
which I look and see the future.
Never gave it much thought before
since being alive each day is a surprise.

Now, with procrastinated perception,
it occurs to me the window panes
are actually the bars of a prison,
and the view is marred by grime.

Ain’t no ‘mount o’Windex
gonna make this future look bright,
and I’m pretty sure you’d frown
if I accosted you with blue ammonia.

This house of cards is tumbling
into the hearth I built that blazed for you.
Each face on the faded cards smolder,
and I swear the queen of hearts screamed.

If I died, I would come back for you.
I’d be like ghostly Swayze who learned
to move objects with intangible fingertips
Just so I could kick in your teeth.

Twice. A day.
For the rest of your miserable life
until we’re together again in ether.
If that ain’t love, I don’t know what is.
Posted by Christi Goddard at 9:06 PM

Congrats on your awards. And OMG! Your poetry rocks. :)

Congrats on your bloggy bling, Christi!

Sarahjayne and Shannon: Thanks a bunch. My poetry is obviously a bit like my prose :-) Or maybe it's the other way around...

(and congrats to everyone! including you ;D)

and wow. that poem was intense. great, great stuff!

OMG I didn't know it but I WAS secretly YEARNING to hear some of your poetry, because it's brill! I kept reading it and going "oooh, I love that it's my favourite part" then reading on and declaring the same of the next section (and no, I don't have anterograde amnesia, it's just all so good). I think it's all really powerful stuff!

Congrats on the awardiness :~D

Accosted you with blue ammonia... ha, love it :)

Thanks for the award! Yay!

"Ain’t no ‘mount o’Windex
gonna make this future look bright,
and I’m pretty sure you’d frown
if I accosted you with blue ammonia."

Now that's poetry. Langston Hughes might turn up an eyebrow, but I like it. I like the imagery, the slapdash labeling ("blue ammonia") and the bucolic voice in particular.

But you get two demerits for inserting Patrick Swayze in. Sorry, that's inexcusable.

Tahereh, Steph, and Postman: You're most welcome. You guys are awesome. And have excellent taste, obviously. (kidding, kidding)

Mia: I'm starting to suspect you're just easy to please. All my stuff's your favorite. :-)

I can't help it if you write so goodly :~) And it WAS good! I can't write poetry for toffee, so I'm really jealous you're good at this too...

Hey now, never knew you could write poetry. And just like your other work this is freaking awesome too. I wish you'd get a hit on a query then get an agent so I could say "Hey, I know her!"

Congrats on the other awards! Soulmates is cruising around the blogsophere like lightening.

Congrats on the award. And your poem is funny in a not so ha ha type of way. But, what do I know...I'm no poetry expert.

Mia: anyone can write poetry. You take a paragraph, randomly insert your cursor, then hit enter until the paragraph becomes stanzas.

Anne: Like all of us, I hope to get an agent someday, but I know the odds. I will of course pimp all of my buddies when that happens.

Loved the poem! I like you how did near rhymes with "procrastinated perception"

Thanks for the award! I am glad I make you laugh!

Thanks for the award. Your poetry is so much better than mine, it's even readable! Lol, just kidding, I loved it and that is why I do not feel the need to write poetry. Mine stinks and there are enough talented people like you to fill the void I might leave. :)

Congrats on your awards! And dude, I'm impressed by anyone who can write poetry. :)

Thanks for the award. I hope I make you laugh when I TRY to and not when I don't, if you know what I mean.

And I have NOT been avoiding your blog. I have been here everyday, despite being referred to repeatedly as Satan's Child. Now if you'll excuse me, I need to get back to my novel, The Devil You Don't Know.

Congrats on your awards!

The poetry was full of awesome...love the imagery.

Hey, thanks Christi! You know how much I love awards....

Loved the poem. You definitely have a way with words. Well done.

LOVE the poem, especially the Ghost reference. Girl, you can write.

Congrats on your awards, and thank you for passing one on to me. :)

Elizabeth: You're welcome. And I'm glad you liked my poem.

Charity: Stop it. I'm sure your poetry is just fine. Buck up! You're a writer and therefore awesome.

Terry: You make me laugh in SO many ways, I can't even begin to count them.

Lola: Thanks for coming by :-) Stick around as long as you like.

Wendy: You're welcome. Glad you liked me poem.

Shelley: Of course. I'd pass them ALL on to you if I could, but I try to spread the wealth evenly. Like a socialist healthcare plan. That's me.

Glad I make you laugh! Probably because I am such an idiot in the first place. :)
Love the poem! I am always in awe of your writing.

Penname Pauline: Shut it. You're not an idiot. You're awesome. AWESOME I SAY.

Okay, okay, okay. I found the keys to the Miamobile. Zombie still missing but we are making progress.

You gots the keys? Cool *takes out hot dogs* I'm thinking the zombie will find us eventually.

LAWL. A year on and I still do not know how to write poetry. Teeeheee.

That's because you keep trying to write poetry. Try POE-try. I guarantee you have mad skills there Ms Mia.

Hahahahah but I have to ALSO change my name to POE for that to work.

Then CLEARLY you need to invent MIAtry.