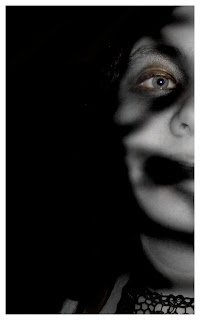 I post these fairly frequently and I know some of you enjoy them, but would you rather I wrote more about things in real life or something? A lot of writers' blogs have publishing information, book reviews, and stuff like that. I'm not trying to copy or anything, I just want to keep my readers interested. I love you guys and would hate for you to wander off.

The faucet drips once. Then again. Soon its solemn echo is the counter beat to my heart’s crazy rhythm while I sit curled up in my father’s ragged recliner. I’m afraid to move 'cause I saw your eyes at the window again, the whites of them reflectin’ the light from the fridge when Gramps went to grab a beer. I hope that I’m in the shadows enough that you don’t see me hidin’ in plain sight. It’s been a while since the windows’ve been cleaned, after all. At least since before Mama died.

Do you miss her like I do? She had a great smile, so long as she didn’t have a bit of snuff stickin’ out ‘tween her teeth.

I wonder why you come. You never talk to nobody, and you never let nobody see you but me. You’re scary. I don’t mean to come off as rude or nothin’, but you make the hairs stand up on my arm even when it ain’t cold out. I see you growlin’ at Daddy sometimes, but he ain’t never hurt nobody. I told him th’other day that you is the Boogey Man, but he smacked me on my behind and told me I had an imagination like Mama’s.

Did she see you, too? Maybe you’re the one that made her heart go kaput. Startled her plumb outta her mind, I bet. Like the time she caught Daddy nekkid in the goat pen.

Are you hungry or thirsty for something? You’re always licking at your sharp teeth when you look inside. I can’t tell if you have lips, but everything does, I think. Maybe that’s why you don’t talk, huh? Your mouth don’t work right. I’ve seen you smile, though, so I guess you got lips somewheres. I seen you smiling through the bathroom window when I’m showerin’ all alone. Daddy don’t come in now that I’m gettin’ my girly unmentionables, but you still try to. I wonder if you’ll ever figure out that window latch.

Or if you would have if Daddy’d have let you. Won’t be happenin’ now, though. I told Daddy all about you this mornin’ and he’s been waitin’ for you. You know it, don’t you? I see you lookin’ around and wonderin’ where those noises are comin’ from. That’d be Daddy, Uncle Jeb, about a zillion dogs, and pretty much the whole entire neighborhood watch.

Teach you to look in my windows, perv. Whatever that means, but the way Daddy said it makes me think it’s not a good thing. He said ain’t nobody gonna be touchin’ his little girl but him.

He sure does miss Mama.
Posted by Christi Goddard at 8:25 PM

Accidental LOL there--->"would hate for you to wander off" made me think of myself as an elderly grandmother stuck in the middle of shopping centre and wandering aimlessly for some reason...which in turn made me giggle and, because I have a cold right now, that promptly turned into a lengthy breathless cough.

Christi, I love you so much I almost died back there, please keep writing this stuff. :P

"I wonder if you’ll ever figure out that window latch." *shivers* Best line because it freaked me out. It's a powerful sentence since she is so calm about something that would be so scary to me... and "that" instead of just "the" really suggested he'd been trying to open the window, ya know?

Great stuff, keep them coming if you're happy to because I love reading them :~D And, as I said, I almost died back there so you could consider it a last wish if you wanted..... :P

I liked this very much. And I like your blog fine, just the way it is. :)

"Ain't nobody gonna touch his little girl but him"

Holy crap woman, you can get right down to the nastiness of humanity can't you.

That was totally amazing and gritty with a little humor for balance. Fantastic!

And don't change a thing about your blog unless you want to. It's fab just the way it is. I left you an award but I think you already have it.

OMG, Christi. Wow - I LOVE This. It's totally creepy and chilling me to the bone. Brrrr....

And then I laughed here: "Did she see you, too? Maybe you’re the one that made her heart go kaput. Startled her plumb outta her mind, I bet. Like the time she caught Daddy nekkid in the goat pen."

That accent makes it perfect.

You guys are so awesome. Thanks a bunch. Some days I feel pretty good about writing, but there are times when it... well, you know what I mean. Could be the weather. It's miserable here today.

Your shorts are pure awesome, Christi. Disturbingly creepy tone, I loved it.

"Like the time she caught Daddy nekkid in the goat pen."

And of course a little funny, too.

Don't change a thing. You are golden. I read enough blogs on writerly tips and such. You're a breath of fresh air...or creepy air. But I'm weird and sadistic like that...

I'm so glad you guys appreciate my weirdness. I feel lame for saying that again and again, but my lack of better expression is due to it being very simple: I'm glad and grateful.

I am creeped out to the bones from this! Bravo!