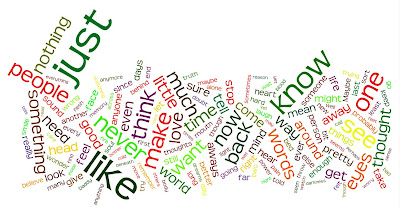 I Wordled my compiled works that I've been posting. I sorta love this thing.

First off, there is an awesome contest here: http://sarahwithachance.blogspot.com/2010/04/something-fun-and-celebratory.html#comment-form

Sarah Wylie is celebrating being published. Go celebrate with her! It's very exciting.

Secondly, I got two chapters done over the weekend, as planned, but some things came up that prevented me from being around so far this week. My apologies to anyone who fretted.

Thirdly, I keep typing things out in this Post box, then deleting them. I hate to publicly pour my inner toxic into the world and bring people down, so let me just say I'm not having a good week and might be scarce. Sightings of me on blogger will be almost as unpredictable and rare as Sasquatch until I get my head on straight(er). I'm lurking around on pages at odd intervals and sleeping more than I should.

Here's a bit of fiction in the meantime.

‘They’ are out to get you. No one knows who they are, but They exist and They mean business. We don’t know where They take you when They find you, or why it’s so important to be afraid, but we feel it in our bones it must be bad. People are right to be paranoid, I think. Not me, so I’m not. I’ve got nothing to worry about, but the rest… oh, yes. They are definitely coming for you people.

I tried to quit smoking today, but I started my period. I’m sure They are to blame for that, but I am still trying to piece together how. Perhaps it is in the water. Whenever They are up to something, They usually start there then move on to hiring aliens when all else fails. Aliens are a last resort, of course. Those little fuckers charge an arm and a leg, and all because they have bright lights and tractor beams.

Well, so did James Tiberius Kirk, but his services were free. He just impregnated the locals. Small price to pay, really, although I wouldn’t want an alien to do the same to me. It would come out looking like a Sally Jesse Raphael and Andy Warhol love child. Which is weird since I’m not entirely sure Andy didn’t fake his own death to become Sally.

We were discussing ‘They’ and how they are out to get you. And your dog. They don’t want your cat for many of the obvious (and not so obvious) reasons, but mostly because the cats are in on it with them. You know it, don’t you? The way their eyes follow you when you move about the room… surveying you constantly and gathering data to be held against you in a court of jaw. No, that is not a typo. You’ll understand better when They’ve taken a bite out of your ass.

I think They are the masterminds behind global warming. They try to blame hairspray and industrial factories, but the truth is… Earth has a temperature knob. I’m sure of it, and I think it’s somewhere in the mountains of Chile. My friends laugh at me and tell me I’m paranoid, but I’m not the one They are after, so I’m really not. I’m just prepared.

Like an adult Girl Scout. Only I ate all the cookies.
Posted by Christi Goddard at 7:13 PM

Awww. I hope you have a better week. I had a bad mid week moment as well and I blame it on the 13th day of the month!!! I'm superstitious like that.

Thanks for the links to the contests. Your wordle cloud looks very unique compared the others I've seen.

Very cool word cloud. I don't think I've seen one like it. :) Sorry to hear that your week is not good. At least it's half over. :) And here's hoping to a better week ahead.

Hope things get better for you!

Congrats on getting so much work done! And oh boy, I forgot that you were in your thirties (your writing has a youthful vitality to it), and I was weirded out by the Sally Jesse Raphael reference, going, "How does she know about her!?" Great fiction, full of energy and intensity as usual.

I have been worried about you, I said to myself, she hasn't been around lately, and just last night I was going to compose an e-mail to you demanding you tell me what's going on, where you've been, but here you are so I won't. I HAVE missed you. If you need to vent, to pour, to rant, feel free to write me an e-mail, I'll listen and then of course try to help because I'm a meddling middle-aged noseybody.

I love your word cloud. I know exactly what you mean about the 'they'. I fear I'm living amongst them myself. If you want something to do, I've got another 'cerpt from Genna & Tony today. We find out some really big news...enitce you entice you. Try and feel better. Will it be over soon? And if not, write to me and tell me all about it, you might feel better after you drop some f-bombs on someone. I use them all the time so I won't mind.

I sorta love your wordle cloud too. I've never seen one like yours. It suits you. Getting two chapters done over the weekend is a big, fat, yummy bowl of goodness.
I'm sorry about whatever inner toxic is tormenting you, but I hope you can bitch-slap it and send it packing.

Thanks guys. I feel a little better today. I took the day off tomorrow, so I'm giving myself a three day weekend, which I hope will help.

Sam - Yup. Old enough to have a daughter who's getting married in June. I'm smiling big that my writing has a youthful feel. I'm writing YA, so I'm glad my writing isn't too old.

Brilliant wordle cloud, I try to do them but they never work out so great.

Thanks for visiting my blog and commenting. I'll always have your back, Christi. You know I'm your friend. I'm still at work, having worked the past 34 of the past 48 hours with zero sleep, and I wrote you to say you have friends here and they've missed you. I'm one of them. Rats, the phone just rang. Bloodmobile here I come. Roland. I think I misplaced my shadow in Texas.

LOL! That was a good laugh. If THEY is Blogger Gremlins then I sure you're right about the cats being in on it. Sneaky little devils.

Roland - I do know you're my friend. Which might be considered odd comparably to the limited contact. Drive safe. If your shadow is here in Texas, then it is probably stuck to the ground due to the humidity.

Donna - They are in everything. They made my chair start to squeek today. Damn them and their wiley ways.

Remember, even paranoid people have enemies.

Hey Christi! How are you doing? How's the querying going? Did your beta reader finish reading your novel?

Hadn't talked to you in awhile, thought I'd drop in to say hi.

Is that your black cat in the pic? I've got a couple myself. And no, ours too aren't as innocent as they seem.

Hope all is well!