What Makes Us Who We Are

I have two teenage daughters. As I watch them go about their lives in their own little universes, it inevitably leads to flashbacks of my own teenage years. My high school career was at the very end of the 80s and very beginning of the 90s, so I have two of our most warped decades to thank for my personality. I also blame a lot of it on my dad.

When I get an idea for a story I want to tell, I write it down. But as I read back through it once it’s done, I can see the influences from my teenage years. It’s all there, glaringly obvious to me. If I ever become published, I think it might come as no surprise to my readers to discover who my major media influences were (and in many cases, still are).

The Far Side – I have six books of Gary Larson’s collections, and they are left out and read through daily when I have a few minutes of ‘me’ time. This current sentence was going to be TMI, but I removed it. You’re welcome.

Pictured: How I Plot My Character's Life, Part I. 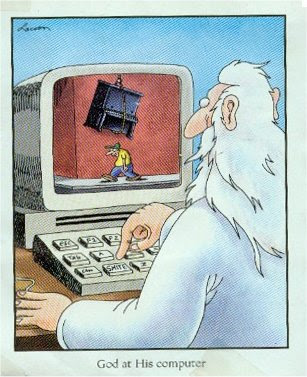 Sci-Fi – I was going to list out specifics, but really it needs to be lumped into one. X-Files, Star Wars, Star Trek, the Terminator, Sliders, X-Men comics, etc. 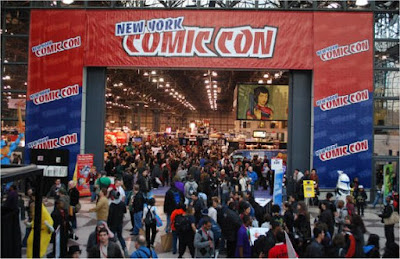 Monty Python’s Flying Circus – They used to show re-runs late at night on MTV, as well as Britain’s The Young Ones. These were happy, happy times for me, my friend. The offbeat and unexpected plots have heavily influenced my own plotting.

Pictured: How I Plot My Character's Life, Part II. You might notice a running theme... 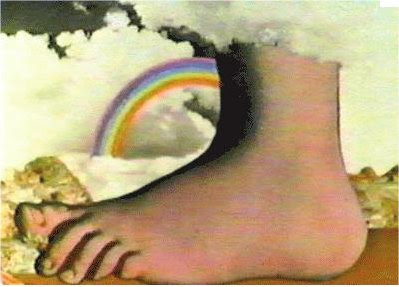 Dean Koontz – Yes, I mention him on occasion. I read my first Koontz book when I was 12. Lightning. It was about time travel, fighting Nazis, redemption, and being a writer. It’s been a huge influence on me, and most likely why my first three series I wrote dealt with time travel, and why I suck up all things time travel like a sponge. A lot of people dismiss Koontz as a horror writer and never try him, but he’s written some of the most amazing characters I’ve ever read.

Pictured: OMG Heaven cubed. Aka: The Incarnate of Awesome. 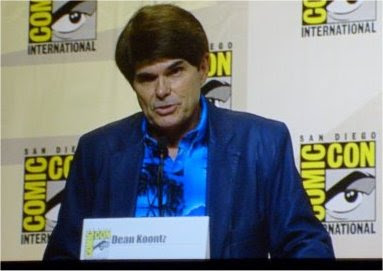 Darlene Conner – Played by Sara Gilbert on Roseanne. I was (and in many ways still am) a version of this character, so much so my dad called me ‘Darlene’ half the time. It reflects in my narrative voice when I write.

Pictured: Me and my nerdy boyfriend. Funny how I look more like Roseanne now. OMG. WE DO TURN INTO OUR MOTHERS. 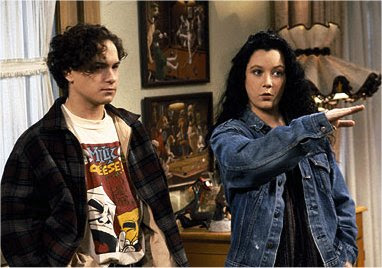 So, there’s my list. What’s yours? What are the defining media influences on you and your writing?

Posted by Christi Goddard at 9:35 AM

OMG. YES. All of these. But specifically OMG SLIDERS! I thought I was the only person in the world who REMEMBERED that.

I thought there'd been some sort of EVENT that blanked everybody's memories but mine and I was fated to ramble about it to myself forever.

YES. Mmmm. Next time we speak it might be MOSTLY about Sliders. I am just saying.

I loved so many of these: Monty Python, Dean Koontz, and everything on your scifi list :)

Had to come here and say I thought the scene you submitted to Nathan Bransford's contest is awesome.

(Not stalking you. Swear.)

I've read 114 entries (at this point) and yours is the only one I actually found at all funny.

Media influences on my writing?

Those are the first that come to mind.

No, Mia, Sliders was AWESOME. I was so upset when it went away.

Darley, I'm with you on John Hughes, the staple of my movie going as a kid. Letterman's top 10 was always hilarious.

ooooh! cool lists!
can i guess the tmi sentence had something to do with reading on the toilet??? i lend books out to a work pal regularly, and she let it slip to me recently that she does most her reading on the toilet. i told her that if she drops one of my books she must buy me a new one... and burn the old one. i think book burning is acceptable if it's coated in bodily waste, ya know!

my life has been highly influenced by buffy.

While I adore Buffy and Angel both, they didn't hit the media until I was in my 20s so they don't influence a lot of my personality. They definitely influenced my entertainment tastes, however. I expect serious funny with my scary now.

Lovely and Interesting Blog!Found you through Alleged Authour.. I am def a new follower.:)