The Passion - a short

So, it's been a while since I wrote a new one. The random spark flared last night and I polished it up today after work. It's exceedingly short (164 words) but to add any more would take away from it, I think. Or maybe I could write my fourth novel from this humble beginning? Just thinking out loud, as I'm wont to do. Anyhoodle, enjoy. 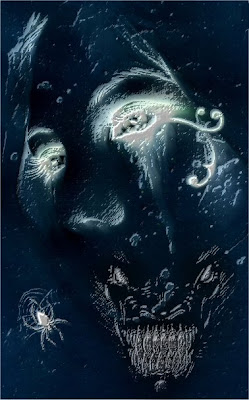 
It was the passion of the thing that moved me.

Those hushed voices, a murmur of disbelief in my ears. All else shrank from my reality like heavy clouds sucked into a silent vacuum, leaving only the blood which danced down his fingers and my entranced gaze.

Pressure built in a painful swell until I released it in a primal scream that threatened to pull my lungs out into the heavens with it. Fear was not the blanket into which I crawled. My cowardly feet twitched to move, but I remained. Grief blipped like a sonar screen in my mind, scanning the void for emotion. It found none; only irreconcilable awe.

I was enamored by the passion.

The crumpled body before me was an unfortunate side effect of a man’s emotions stripped bare. Rage and love, a two headed beast, swallowed the man whole in an instant, and the flash of steel carried away my mother.

I used to call the man my father.
Posted by Christi Goddard at 7:55 PM

It could prove a great start to a novel -- perhaps with Greek Mythological undertones -- the Olympians were hard on their fathers -- look at what Zeus did to his. Roland

Wow. Very moving. I really enjoyed this, Christi.
I agree with Roland--start of a new novel.

Ooooh soo creepy. I love it. My last couple of books came from seeds planted in short stories or flash fiction. So yeah, I think you could do something here.

That was great, Christi. The last line really got me. I can see this developing into a novel; you've certainly piqued my curiosity.

Yep. You should do something much deeper and much bigger with this. I like Roland's idea....great short!

I've been away for a couple days and just now saw your blog's new look. I like it!!!

very powerful, and i agree adding to this bit would take away from it. but i mean that as a scene. now more scenes to expound upon and convert this into a novel.. well that would be quite awesome!

i love the "rage and love, a two headed beast"

Wow, that was so powerful. I loved "the blood which danced down his fingers", great stuff.

By reading this article I get a lot of lessons and this is very useful . cara menggugurkan kandungan